When he and another teacher at Bloomington Jefferson – Don Verdegan – discussed the idea of a school trapshooting team, then got school officials to sign off on the plan, he had no clue how many kids would attend the informational meeting, or ultimately sign up to join the team.

Turns out there was plenty of interest, as 55 kids came to the meeting. And 34 of them now are signed up and this spring will be part of Jefferson’s inaugural team.

“You think shooting teams as the country folks who are shooting .22s out in the fields, picking off varmints, and hunting all the time,” said Jon Leverenz, who, along with Verdegan, will coach Jefferson’s team. “There is a big group of hunters at Jefferson.”

And there is a big group of schools across the state that now have trapshooting teams and are part of the Minnesota State High School Clay Target League. It’s come from humble beginnings, but has become the fastest growing high school sport in the state.

There has been growth in the league again for 2013, and 3,352 kids were registered to participate, said Jim Sable, executive director of the Minnesota State High School Clay Target League.

The Minnesota State High School League recently approved a partnership with the trap league for its state tournament in June of 2014, elevating the league to the status equivalent of sports such as football and basketball. As a result, Minnesota will be the first state in the nation to hold a high school sanctioned state trapshooting tournament. 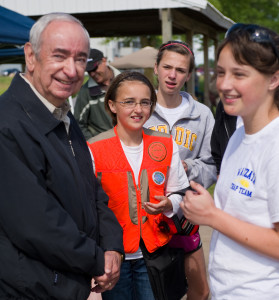 Jim Sable began the Minnesota State High School Clay Target League after realizing and reacting to the average age of members at the Plymouth Gun Club.

The road, though, has been a long one.

Sable had been a member of the Plymouth Gun Club for years, and the average age of the club’s members was growing. Some wondered what would happen in the future if the trend continued. The idea was to form a youth program.

Sable wondered how his club stacked up against others in the state, but learned the DNR didn’t have such information. So he created a survey, and the agency provided mailing labels. The results showed that a fair amount of gun clubs in the state had gone out of business, and that the Plymouth Gun Club wasn’t alone.

“The average age at the Plymouth Gun Club was just under 56,” Sable said. “The others in the state were older than that – the average age was close to 60.”

“That something different was to get the program into the schools,’ he said.

After all, if you want to find kids, what better place?

Sable’s first call was to the community outreach coordinator at Orono schools, who was looking for people to take part in a mentoring program. Sable told her he wanted to teach kids to shoot trap. She told him a student – who wanted to learn to shoot, but didn’t want to kill anything – had left her office moments earlier.

Sable tracked down the student and asked her if she had brothers or sisters or fiends who would be interested. She had a brother and four friends. And so went the earliest days of the Minnesota State High School Clay Target League.

It’s seen solid growth the past decade, from all corners of the state. And so long as kids are in at least sixth grade and have their hunter education certificate, they can participate.

“The kids are loyal to the sport,” Sable said. “We start in sixth grade, so by the time you’ve done it from sixth through 12th grade, it’s kind of become a way of life. These kids are going to be lifetime shooters.

Some of the kids – if they haven’t already – will take up hunting too. Sable was a hunter before he took up trap shooting.

At some point, he joined a rod and gun club, and then started trap. When he retired after more than 40 years in the advertising business, he wasn’t sure what to do. He kept going to the gun club to shoot, and started bringing his grandkids along with him.

They enjoyed it, but it got him thinking: “If we don’t have new young people coming in to take over the leadership positions, what’s going to happen to it?”

That was more than 10 years ago. Today the average age at the Plymouth Gun Club is 40 years old, there are regular members and junior members, “and we have a waiting list for both categories as long as your arm,” Sable said.

And back at Bloomington Jefferson, Leverenz looks forward to the school’s inaugural season. Before he and Verdegan laid the groundwork for it, they had no idea about the pent-up demand. But the kids – and adults who want to help – have come out of the woodwork.

Leverenz has been fielding calls from former students, too – alumni who say, “I wish that was going on when I was there.”